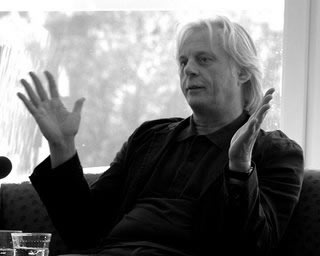 Last Saturday in the X Estoril Film Festival, was the second time I had the opportunity to question Manfred Eicher, the charismatic founder of ECM. The first happened in 1993 at the launch of the Jan Garbarek’s Twelve Moons, the ECM 1500 record.
As some knows, by that time I was working as a promoter of the Portuguese distributor of ECM, Dargil, and as such I went to Zurich to the meeting of developers, distributors and journalists sponsored by the ECM. Before the short concert with Jan Garbarek, Manfred Eicher answered to some questions from the audience.
This second time happened last Saturday, at the end of the projection of Sounds and Silence by Peter Guyer & Norbert Wiedmer, about the ECM.
I must confess that Manfred Eicher's responses are always something frustrating, and I don’t only speak of my questions. I think they are always too vague and evasive. But Manfred Eicher is an old fox that will never be caught.
A friend told me that some of my questions should not have been done, as they are nothing but personal considerations, and will never be answered. Maybe he is right. Anyway they were made and here they are.
As a footnote, concerning Sounds and Silence, though clearly well filmed and having many moments of interest, lacked unity that would allow him to live independently as a film subject, and ultimately proves to be a (poor) object of advertisement. Still, for lovers and connoisseurs of ECM, the movie has, as I said, many moments of interest.

Question 1 (Zurich, 1993): The ECM has an extensive and varied catalog. It also has some characteristics that are associated to you, as charisma, accuracy and perfection, which forms the ECM as a very personalized label. As far as we know, all decisions, including what to record or not, belong to you. The ECM catalog includes Jan Garbarek, Keith Jarrett, Egberto Gismonti and Ralph Towner, but also Wadada Leo Smith, Hal Russell NRG, Art Ensemble of Chicago, Terje Rypdal and even Steve Reich, Messiaen, Giya Kancheli, Meredith Monk and various interpreters play Bach or Shostakovich: ie, includes jazz, fusion and mainstream, but also free-jazz, classical and contemporary music.
The question for you is simple: do you like all the things you edit or what are your criteria to choose what to record?

Manfred Eicher: For me, this is not a matter of what I like or dislike. My decisions are based mainly on what I consider deserving or not deserving to be recorded. My criteria are not criteria of taste, and taste no matters to decide whether a disc should or should not be recorded. And public taste does not affect my decision. Just the music does.

Question 2 (Estoril 2010): In the early twentieth century, the recordings were intended to preserve a moment to the posterity and give it to the public. They were recordings of music played alive and the audience could imagine it being played. Throughout the twentieth century, most of the recordings went to the studio, causing a new relationship between the audience and the recording. With ECM, I believe that the relationship between the musician, the act of recording and the disk was lost definitively, as if the object could live without the original moment of the recording. As we saw in the movie (Sounds and Silence), you interfere with the recording in the minimum detail, and each ECM disc seems to have both of you and the musician, and he became a living object for itself. And it is a cult object, by the music, but also by its cover and the smallest details of production.
The public no longer imagine the musicians playing, and somehow it is as if the moment of creation was the disc and the recording never even happened.
The question for you is: when you start a recording, your intention is to preserve a moment and a music for the eternity or just create a new musical object?
Manfred Eicher: I'm not really concerned about preserving a moment for eternity, but just do what I know best which is to offer the musician the best possible conditions so that he can realize his ideas. I try to create an empathy with the musician, to hear him and understand his ideas. And I think that is what makes the difference, because the musician must have someone to trust. And this is what I consider my greatest contribution to music: to hear the musician and offer him the best conditions to record his creation, offer him the best possible sound for his creation. And I try to do it as best as possible, with the best sound possible, balancing the sound, trying to understand what the musician intended, highlighting another instrument or sound, often as the musician can not do because he knows how to play or compose but writing is what I do. I'm not thinking of the public, but if we succeed, then that's good for the musician and music and I can say that I was also successful.
But the album is not done with the pretense of being something special rather than being a reflection of a good composition and good performance. And in the end is always the public who decides.

Question 3 (Estoril 2010): What do you think about the industry crisis, how does the ECM sees its future and what is it doing to face it?

Manfred Eicher: I think we should not regret too much and not listen to the pessimists who are only able to see the negative things everywhere. I try not to think about it and concentrate purely on what I do. And after all I really do not feel myself as a part of the industry and I will continue to do just what I do the best until I can do it.